But not gone, will try to get going here again, my focus here will be moving towards hunting and sportsshooting (and the odd geekstuff on occasion :-p ) 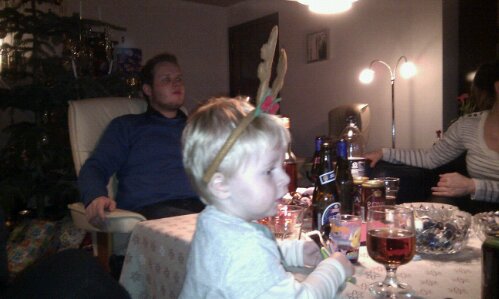 I’ve been eating more or less non stop that last couple of days. I’ve gotten some nice gifts and my son has celebrated his first real Christmas. There’s (still) a lot if snow outside… what’s not to like 🙂

He attacked everything in life with a mix of extraordinary genius and naive incompetence, and it was often difficult to tell which was which.
– Douglas Adams

But i will sort and upload them when I get the time. Lots of pictures of Oskar… Heres a video, from Århus:

Stumpled on this… It might be the cutest animal ever!

Meet the sloths from Amphibian Avenger on Vimeo.

I’ve updated my wishlist, take a look and by me gifts. And then I moved and updated http://centerparken.net . It was living on my homeserver and that had potential to become a mess. I found a good home for it and upgraded it to wordpress (it was an old homebrew setup before). It is now possibel for someone other than me to maintain it…

Well, the telling of jokes is an art of its own, and it always rises from some emotional threat. The best jokes are dangerous, and dangerous because they are in some way truthful.
– Kurt Vonnegut

At long last, LHC, almost ready. Will we be here for a late lunch or will it all be over in a few hours? Just in case this is the Armageddon, I won’t be doing the dishes today, why bother.

This is what it is all about: