There is a theory which states that if ever anyone discovers exactly what the Universe is for and why it is here, it will instantly disappear and be replaced by something even more bizarre and inexplicable.

There is another theory which states that this has already happened.

And the above quote is from ’79 how’s this news?

Besides, the entropy bit is wrong, that is not Penroses argument. Black holes does not dissolve entropy…

He attacked everything in life with a mix of extraordinary genius and naive incompetence, and it was often difficult to tell which was which.
– Douglas Adams 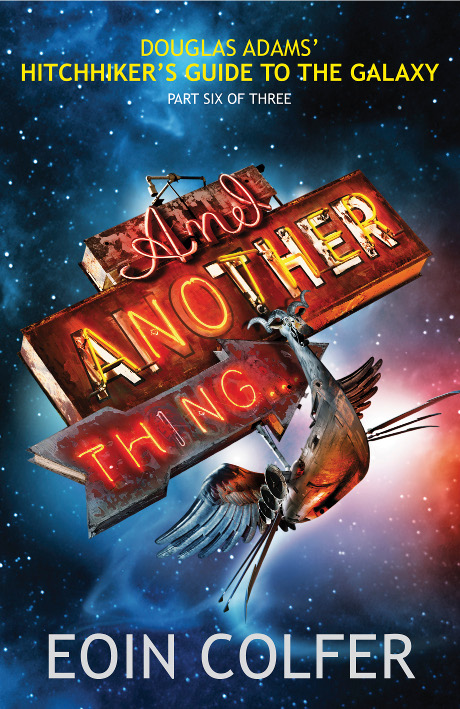 Children’s author Eoin Colfer has been commissioned to write a sixth instalment of the Hitchhiker’s Guide To The Galaxy series.

Maybe that universe just shouldn’t be tampered with by anyone but Douglas Adams…. Or maybe it will be a brillant followup that will enchant all of us for years to come?

Today is may 24. What is the significance of that you might wonder, not much actually. Tomorrow though, thats another story, tomorrow is towelday! Whatever you do tomorrow, bring you towel and be a hoopy frood!

It seems infocom had a second shot in the gun, just never quite made it, a shame!

This bit was spawned by a discussion about quantumphysics, how timetravel and Douglas Adams arrived at the scene is beyond me. But as always Douglas Adams had an answer for us, this is probably not it:
One of the major problems encountered in time travel is not that of becoming your own father or mother. There is no problem in becoming your own father or mother that a broad-minded and well-adjusted family can’t cope with. There is no problem with changing the course of history—the course of history does not change because it all fits together like a jigsaw. All the important changes have happened before the things they were supposed to change and it all sorts itself out in the end.
The major problem is simply one of grammar, and the main work to consult in this matter is Dr. Dan Streetmentioner’s Time Traveler’s Handbook of 1001 Tense Formations. It will tell you, for instance, how to describe something that was about to happen to you in the past before you avoided it by time-jumping forward two days in order to avoid it. The event will be described differently according to whether you are talking about it from the standpoint of your own natural time, from a time in the further future, or a time in the further past and is further complicated by the possibility of conducting conversations while you are actually traveling from one time to another with the intention of becoming your own mother or father.
Most readers get as far as the Future Semiconditionally Modified Subinverted Plagal Past Subjunctive Intentional before giving up; and in fact in later aditions of the book all pages beyond this point have been left blank to save on printing costs.
The Hitchhiker’s Guide to the Galaxy skips lightly over this tangle of academic abstraction, pausing only to note that the term “Future Perfect” has been abandoned since it was discovered not to be.

To resume:
The Restaurant at the End of the Universe is one of the most extraordinary ventures in the history of catering.
It is built on the fragmented remains of an eventually ruined planet which is (wioll haven be) enclosed in a vast time bubble and projected forward in time to the precise moment of the End of the Universe.
This is, many would say, impossible.

In it, guests take (willan on-take) their places at table and eat (willan on-eat) sumptous meals while watching (willing watchen) the whole of creation explode around them.

This, many would say, is equally impossible.

You can arrive (mayan arrivan on-when) for any sitting you like without prior (late fore-when) reservation because you can book retrospectively, as it were, when you return to your own time (you can have on-book haventa forewhen presooning returningwenta retrohome).

This is, many would not insist, absolutely impossible.

At the restaurant you can meet and dine with (mayan meetan con with dinan on when) a fascinating cross-section of the entire population of space and time.

This, it can be explained patiently, is also impossible.

You can visit it as many times as you like (mayan on-visit re-onvisiting… and so on – for further tense correction consult Dr. Streetmentioner’s book) and be sure of never meeting yourself, becauses of the embarrassment this usually causes.

This, even if the rest were true, which it isn’t, is patently impossible, say the doubters.

All you have to do is deposit one penny in a savings account in your own era, and when you arrive at the End of Time the operations of compound interest means that the fabulous cost of your meal has been paid for.

This, many claim, is not merely impossible but clearly insane, which is why the advertising executives of the star system of Bastablon came up with this slogan: “If you’ve done six impossible things this morning, why not round it off with breakfast at Milliways, the Restaurant at the End of the Universe?”

Life… is like a grapefruit. It’s orange and squishy, and has a few pips in it, and some folks have half a one for breakfast.

I’m Dying here!
I’m sitting here, listening to Douglas Adams and it is killing me! My muscles in my stomach are aching from laughing and I can’t sit up straight any more. Do any of you know how he came up with the name Slartibartfast? I do, but I wont tell you, but it is funny, trust me on that…
I think I’ll go to bed now, still giggling and smiling, if I end the first 30 years of my life like that, perhaps the next 30 will be just as fun 🙂